Carrier Introduction This opening argument against the immorality and illegality of abortion is simple, short and largely unoriginal: As will become apparent, the present argument leaves numerous fundamental assumptions as undefended givens. The novelty of the present debate is that the positive position shall be taken by a secularist, whom I presume shares many assumptions in common with me, in particular some physicalist account of mind and existence, and a nontheological understanding of morality and law.

Pro As explained in the comments, my opponent unfortunately missed the deadline for posting his argument. But as I wish to continue the debate, I have allowed him to post his round 2 arguments in the comments.

Here is the link: I will now refute Con's arguments. Rape My opponent argues that abortion is justified in cases of rape in order to prevent the woman from suffering the pregnancy. Nobody denies that having to carry the child of your rapist will be probably be mentally unsettling, but in order for this to be shown to be a justification for abortion it must be demonstrated that this is a less preferable event than the killing of the foetus.

In cases of rape, we have two beings whose welfare we are obliged to recognise. Between having an abortion and not having an abortion, the results are: Someone will undergo nine months of unwanted pregnancy 2.

Someone will be killed The latter is evidently a worse consequence, at least on a utilitarian basis. If someone is killed then they have their whole future life eliminated whereas undergoing nine months of unwanted pregnancy is a temporary period of physical discomfort.

So in this case, any suffering of the mother is the lesser of the two evils when compared with the killing of the foetus. Hence abortion isn't justified in cases of rape. Con's second point is that a "rape-child" for want of a better phrase would suffer if it is born.

Yet even if we do know for certain that the child's life will be made miserable because of its parentage which we definitely do notthe proposition that we are justified in killing 'rape children' to prevent them from suffering has absurd conclusions, namely that we would be morally and legally obliged to kill anyone if we perceived that their life would contain suffering.

Moreover, the fact that the majority of rape children are living ordinary lives and are not suicidal is testament to the fact that they prefer the chance to live their life as opposed to being killed in order to spare them potential suffering.

Human genepool This argument is an apt reminder of the eugenicist roots of the pro-abortion movement. So the absurd implication of eugenics is that we would be obliged to kill anyone with undesirable genes, as this would improve the genepool.

I wouldn't merely be justified to kill someone with cystic fibrosis, I would be obliged to. If I did not walk into a hospital and shoot all the genetically ill patients, then I would be acting immorally.

This absurdity shows that we are not justified in killing human beings with the pretence of improving the genepool. Con opines that everyone has the right to be born healthy, but he does not explain how this right supersedes the fundamental right to life.

With Con's logic, I could kill an ill person and justify it by proclaiming that everyone has the right to be healthy. Consciousness I accept the premise of Con's statement that consciousness is not present in young foetuses, but he does not cogently explain exactly why this affects the justifiability of abortion.

So far, saying that a foetus is not conscious is a red herring, as it is not demonstrated as to why this should make abortion any more or less justified. It would seem that lack of consciousness does not permit killing, as there is no reason why killing an unconscious person is anymore justified than killing a conscious person.

Whether someone is conscious at present does not affect whether they will go on to live a future life, which is the reason why killing is wrong in the first place explained in round 2.

A teenager is not a fully developed human, yet this does not mean that it is justified to kill teenagers. Consciousness is also irrelevant. Is it justified to kill a teenager in a comatose state? Secondly, Con fails to see the clear distinction between a sperm and a foetus.

A sperm does not have a potential future human life, all it has the potential to do is fertilise an egg - nothing more. Morals Con states that morality is culturally relative and subjective, yet the only evidence he gives of this is that "people have different morality".

Marquis attempts to demonstrate that abortion is morally on a par with the killing of an adult human; that is, he tries to show that aborting a fetus is, except in exceptional circumstances, a serious moral wrong.

Abortion: Death of an Innocent Abortion is a topic that is frequently discussed about and fought over as being truly immoral or moral thing to do. Many people view abortion as a way to get out of a sticky situation or merely as an option to get rid of something that they don’t need in their lives at the moment.

The debate over whether or not abortion should be a legal option continues to divide Americans long after the US Supreme Court’s decision on Roe v. Wade declared the procedure a "fundamental right" on Jan.

22, and therefore abortion is the immoral killing of an innocent human being. They say abortion inflicts suffering on the. On my opponent's request, this debate will actually concern whether or not abortion should be legal.

Nevertheless, morality will still have a major part of the debate, considering many of our laws are shaped around moral sentiments. "why abortion is immoral" abortion except in rare cases is seriously immoral, same moral category as killing an innocent adult human being.

Thomson on abortion. A dense of abortion, moderate position. 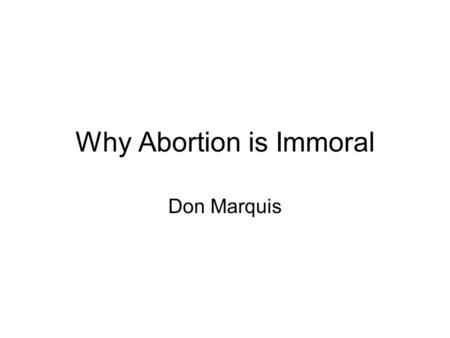 Patrik Lee & Robert George on abortion. The abortion debate is about bedrock beliefs, and once those bedrock beliefs are established, it’s not difficult to construct a logical moral argument on top of them. For example, here’s a simplified version of the pro-life/pro-choice dichotomy.